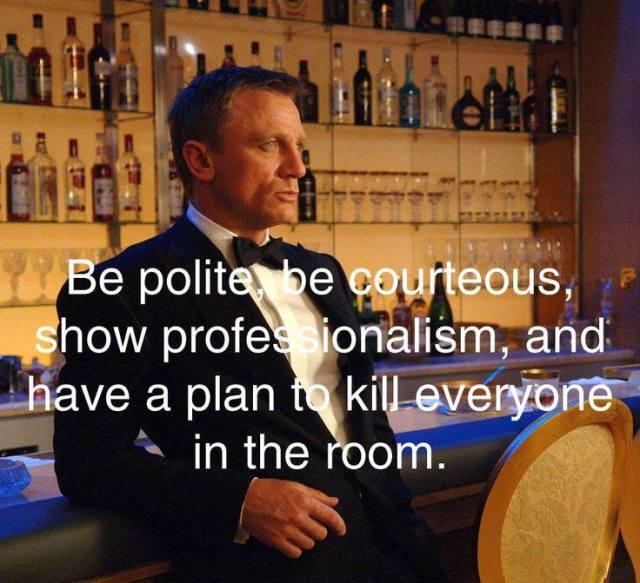 Last night we drove to Tioga to catch the new Mission Impossible movie, a film with the subtitle Rogue Nation. It was loud, somewhat stupid, often improbable, and thoroughly entertaining. But it got me thinking about action movies and spy thrillers.

The genesis of all these movies is of course James Bond. I can’t say that I’ve seen every Bond film. Never saw the Lazenby or Niven films, there might be a Connery film missing, and a couple Roger Moores. So I can’t call myself an expert but I know my way around the tropes. I felt sorry for Timothy Dalton, who didn’t get enough credit for some pretty good work and Pierce Brosnan, who always wanted the films to get a little darker, a little more realistic, but never got the chance. Then came Daniel Craig and at least in his first film, we got what Brosnan pined for.

Keep in mind, we would have never seen Daniel Craig’s grimdark Bond if it hadn’t been for Jason Bourne. When the Bourne Identity came out in 2002, fans and critics were saying that it was what the Bond films should have become. Darker, grittier, higher stakes and realism. Less dependence on gals, guns, and gadgets. And while Casino Royale didn’t go totally in that direction it was a complete triumph. The pre-title sequence still sends a shiver up my spine as we see Bond earn his 00 license. It was graphic, violent, and Craig was at turns volatile and ice cold. It was magnificent.

The Bourne films then upped the game. Bourne Supremacy and Bourne Ultimatum work best when viewed together, the better to appreciate how Paul Greengrass wove the two sequels into a greater, smarter, relentless, and riveting whole. My only complaint is that the fight scenes are too often confusing – shot in that damn hand-held shaky style that is too much the go-to style these days. (Go back to that Bond scene, the fight in the lavatory. That’s how you shoot a fight.) But still, those two Bourne movies are golden.

The last Bourne movie had Jeremy Renner, a star as oddly compelling in an everyday way as Matt Damon. Daniel Craig is charismatic, consuming, an almost inhuman force of nature. With Renner and Damon, you can almost identify. Renner’s movie did not have Greengrass directing or as engrossing of a storyline. In fact it seemed to crib a little from the first Bourne film. But it was still entertaining and not a waste of time.

This brings us to Mission Impossible. The first couple MIs suffered in that they were like the Moore/Dalton/Brosnan movies. Bloated with too much gadgetry and plot holes you could drive a truck through. Tom Cruise is the oddest of movie stars. He’s hard to identify with, he does have some acting chops but he’s insufficient up against someone like Craig. But yet, people like him. Oh, and he has absolutely no chemistry with any female actors (gee, I wonder what that’s about). The third MI movie suffered because it was written by Orci, Kurtzman, and Abrams, three complete idiots that couldn’t come up with a coherent plot even if threatened with the ball crusher from Casino Royale. But MI: Ghost Protocol was different. Smarter, tauter, with preposterous action sequences that nonetheless left you terrified and on the edge. Cruise seemed less remote, running a little hotter. And Simon Pegg’s role as his comic relief/sidekick became more substantial. Jeremy Renner shows up to give it all a little more gravitas (gee, where have I seen that name before).

Rogue Nation is just as improbable but just as entertaining. There’s even more humor this time around, mostly due to Pegg. Renner keeps it anchored. The gadgetry is ridiculous and fun. And TC does what TC does, pulling off improbable stunts, taking his shirt off, and trying to appear six feet tall. Rebecca Ferguson is the unromantic Bond gal this time and she has as much chemistry with Cruise as its possible for a woman to have, not to mention being damn lethal as well. The movie clicks right along. An oxygen-deprived underwater sequence will leaves the viewer breathless. Some of the plot points are predictable but the cast plows through them with such panache you don’t care. It’s not the equal of the better Bourne or Bond movies. It doesn’t care. Rogue Nation is pure popcorn and it knows it. And even in a world of smarter, darker spies sometime that’s all you need.